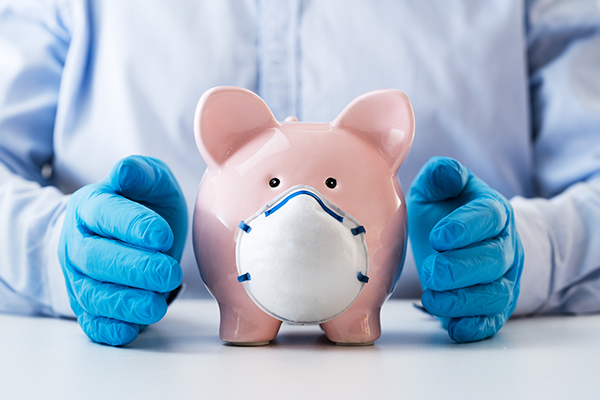 As the coronavirus crisis drains state coffers, policymakers will have to get creative with the revenue available—and will almost certainly debate new revenue streams.  This article provides an overview of the current budget situation and possible targets for new taxes.

After Gov. Sununu ordered non-essential businesses to close, revenue from business taxes and meals and rooms taxes plummeted.  Interest and dividends tax revenue is also down.

At the end of April New Hampshire reported revenues about $75 million below the annual budget plan.

The federal government granted New Hampshire $1.25 billion to spend on coronavirus-related relief, but so far strict rules prevent that money from covering a general decrease in tax revenue.

There is no expiration date for the coronavirus, however, and economic hardship is likely to continue for many months.  Tax revenues aren’t done falling.  New Hampshire will need to patch a hole in the budget.

Cutting spending may not cut it

The Granite State already has a relatively lean budget, however.  New Hampshire government has some of the lowest spending per capita among U.S. states.

New Hampshire’s next option is raising taxes, fees, and fines.  Here’s an overview of some of the big ticket options.

New Hampshire has the lowest tobacco tax in New England by twenty cents, which typically lures shoppers across the border.  So far coronavirus hasn’t stopped those smokers.  Tobacco tax revenue was roughly $5 million above expectations in April.

Strong sales and low tax rates make cigarettes an obvious target for a tax increase.  The Department of Revenue Administration estimates increasing the tax on a pack of cigarettes from $1.78 to $1.90 could generate more than $12 million a year in new revenue.

The House already voted to increase the tax on e-cigarettes in March, through HB 1699.  That bill, like most 2020 bills, is on hold during the coronavirus crisis.  The legislature suspended activity but is planning to reconvene this summer.

On the downside, a cigarette tax increase will primarily burden low income families—the very people struggling to survive during the coronavirus crisis.  Low income residents are far more likely to smoke than higher income residents, and they spend a larger share of their income on cigarette taxes.

Click here to learn more about the policies around tobacco and smoking in New Hampshire.

Business tax revenue accounts for close to a third of all general and education funding in New Hampshire, so any business tax change can have a big impact on state revenues.

Last year’s state budget compromise included a “trigger” for business tax rates to increase or decrease, depending on how much money the state pulls in. At this point it looks very likely that revenue will be low enough to trigger a tax rate increase at the end of the state fiscal year, June 30.

Business are lobbying for a freeze on tax rates, however.  Jim Roche, President of the Business & Industry Association, wrote to legislators, “To enact [business] tax increases at this time ... would be extremely insensitive to the struggles of employers of all sizes and will adversely impact their ability to rehire employees at the very time rehiring is desperately needed.”

Click here to learn more about the debate over business taxes this year.

A capital gains tax is a tax on profits from the sale of certain types of assets, such as stocks or real estate (other than your primary residence).  Depending on how the tax is structured, it could bring in close to $100 million a year.

Opponents argue that a capital gains tax punishes saving and investing—exactly when the economy needs investors.

For years New Hampshire has debated legalizing and taxing recreational marijuana.  The state could generate revenue by taxing marijuana sales, but there are also significant costs related to regulation.  Recent bills to legalize marijuana estimated somewhere around $20 to $30 million in yearly state revenue.

Supporters point out that New Hampshire is surrounded by states that have already legalized marijuana: Maine, Massachusetts, and Vermont.

Opponents argue that New Hampshire should not make it easier to use illicit substances when the state is still battling widespread substance misuse.

Click here to learn more about the debate over marijuana legalization.

As drivers switch to fuel-efficient vehicles, New Hampshire has seen a drop in gas tax revenue.  For several years legislators have considered supplementing the gas tax with a road usage fee.  Drivers would pay the fee annually based on their car’s miles per gallon or miles traveled.

The Department of Safety hasn’t offered any estimates on the potential revenue from a road usage fee, and there could be a huge range depending on how the fee is structured.  Rough estimates guess somewhere in the tens of millions of dollars.  (Motor vehicle registration fees generated around $70 million in the last fiscal year.)

Opponents argue that a road usage fee unfairly punishes people who are driving vehicles that benefit the environment.

Click here to learn more about the debate over a road usage fee.

New Hampshire voters have shown little tolerance for any broad-based sales or income tax, but Granite Staters might consider a limited proposal, such as a sales tax on luxury goods.

Budget writers could also raise fees on everything from vanity license plates to dam permits.

Lastly, the state could revisit expanded gambling.  For example, the legislature recently rejected bills to allow historic horse racing terminals at charitable gaming locations.  Those bills estimated about $10 million in annual revenue for the state.

Add to the gas tax. It will

Add to the gas tax. It will hardly be noticable right now. Estate tax over a million. Lodging taxes, especially on short term rentals would not hurt residents. Sales tax on some luxury goods and guns.

Add to the gas tax. It will

Add to the gas tax. It will hardly be noticable right now. Estate tax over a million. Lodging taxes, especially on short term rentals would not hurt residents. Sales tax on some luxury goods and guns.