New Hampshire is the only state in New England that still puts people to death for committing certain types of murders. As the state’s law currently stands, not all murders are eligible for a death sentence.  However, killing a police officer , murder during another crime such as rape, and murder-for-hire are all offenses that can lead to a death sentence.

This year, a group of 12 legislators from across the aisle are sponsoring HB 455 which would change the punishment for capital murder from the death penalty to life imprisonment.

Last year a bill to eliminate the death penalty passed the Legislature but was then vetoed by Governor Chris Sununu.  Repeal advocates are hopeful that with a Democratic majority in 2019, the Legislature might be able to override any such veto this time around.

Repealing the death penalty would not change the fate of Michael Addison, who was convicted of murdering Manchester Police Officer Michael Briggs in 2006 and sentenced to death. Addison is New Hampshire's only death row inmate.   New Hampshire’s last execution was in 1939.

The New Hampshire Department of Justice says that death penalty cases are more expensive to prosecute and investigate than those which do not seek the death penalty.  It provides the example of the Addison case which to date has cost the state $2.5 million to prosecute and will continue for several more years, resulting in more costs.  On the other hand, the cost to prosecute a first- or second-degree murder ranges from $400,00 to $550,000 and is much less for cases that get resolved before going to trial. The department indicates that state expenditures will therefore decrease as a result of a death penalty repeal, but they cannot predict by how much.

Many, including the New Hampshire Council of Churches, believe that the death penalty is morally and spiritually wrong.  Other supporters of repealing the current law agree the system is an imperfect system that could result in inhumane treatment or an innocent person being put to death.  They point to the fact that an astonishing number of prisoners have been exonerated from any wrongdoing, including death row inmates. Additionally, they claim eliminating the death penalty will save the state millions of dollars.

Rep. Renny Cushing (D), a sponsor of last year’s and this year’s bill, said, “People have come to realize that the death penalty is just a failed public policy ….  It's expensive. Mistakes are made.”

Opponents of a repeal point to the fact that New Hampshire’s death penalty is very narrow and rarely used, but argue that it has served as a deterrent for years. They also hold that for those guilty of capital murder, the punishment should fit the crime. Many also believe that the victims’ families deserve restitution.

Speaking to his veto of last year’s bill, Governor Chris Sununu said, “I stand with crime victims, members of the law enforcement community, and advocates for justice in opposing a repeal of the death penalty.” 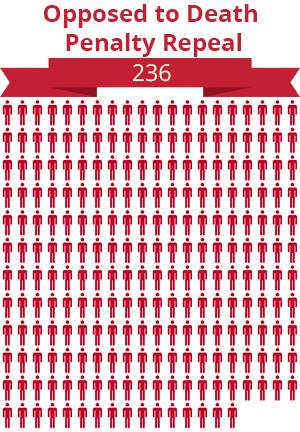 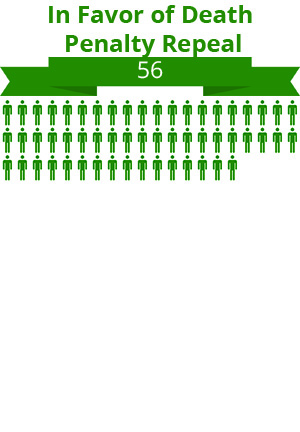 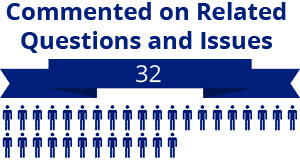 No: 236 people were opposed to repealing the death penalty.

Yes: 56 people were in favor of repealing the death penalty.