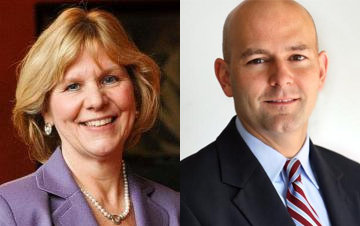 Two prominent New Hampshire politicians joined the race for the governor’s office this week, seeking a shot to fill the seat Gov. Maggie Hassan will leave vacant as she pursues a challenge to Republican Sen. Kelly Ayotte this fall.

State senator and Senate Finance Committee chair Jeanie Forrester made an official announcement of her bid for the Republican nomination in Meredith. Forrester will have to overcome rivals including Executive Councilor Chris Sununu, state Rep. Frank Edelblut, and Manchester Mayor Ted Gatsas.

On the other side of the ticket, former Portsmouth mayor Steve Marchand announced his candidacy for the Democratic nomination, joining another executive councilor, Colin Van Ostern, and Mark Connolly, the former director of the state Securities Regulation Bureau.

Several independent candidates have also declared their bids for the governor's office.

Forrester cited her support for gun rights, her pro-life stance, and her opposition to a sales or income tax. “I am the right candidate,” she argued.

In an interview with WMUR, Marchand listed the state’s heroin epidemic as a key issue for his campaign. “What we need now in our next governor is somebody who understands that the key to New Hampshire’s success is our quality of life,” he said.

Learn more about the candidates on our Prepare for Elections page.