Should cities and towns be able to ban plastic bags without approval from the state?

Twice in the past, the Portsmouth City Council has voted to ban the use of plastic shopping bags. But the city can’t carry out the ban because the state Legislature won’t allow them to do so.

Plastic bag ban back on the agenda for 2017

The text of those bills is not yet public.

Bartlett’s bill is “relative to the use of small capacity, light weight plastic bags by retailers.” Shepardson is seeking a bill “allowing towns to regulate disposable plastic shopping bags.”

On March 3, the New Hampshire Senate will vote on SB 410, a bill that would allow towns and cities to ban plastic bags at large retailers.

Sen. Martha Fuller Clark is sponsoring the bill on behalf of the Portsmouth City Council, which is interested in a plastic bag ban.

Supporters of plastic bag bans argue that bags are a waste of fossil fuels, difficult to recycle, and can harm marine wildlife.

Plastic bag ban is back 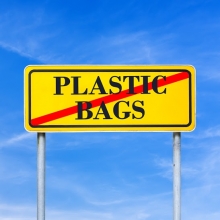 Sen. Martha Fuller Clark of Portsmouth is sponsoring a 2016 bill that would allow municipalities to ban plastic bags.