THANK YOU TO OUR SPONSORS!
LEARN ABOUT OUR SPONSORS
JOIN TODAY AND SEE OUR COMMUNITY GROW 209851 MEMBERS

Rep. Renny Cushing (D-Hampton) is sponsoring a comprehensive marijuana legalization bill. Generally speaking, the bill legalizes marijuana cultivation, possession, and use for adults age 21 and over.

Are there limits on what consumers can do?

Just because cannabis is legal doesn’t mean a person could possess unlimited amounts of cannabis.  Under Rep. Cushing’s bill an individual could possess:

The bill does allow limited home-growing of marijuana, provided the property owner takes precautions to secure the marijuana.

A landlord could choose to ban marijuana cultivation and consumption by tenants.

What are the taxes and revenue?

The Department of Revenue Administration would be responsible for adjusting those tax rates annually based on the Consumer Price Index.

The taxes would not apply to medical marijuana.

The Department of Revenue Administration roughly estimates the bill would generate $19 to $31 million in the first year.

That tax revenue would be divided among the following:

It’s difficult to know what the final costs would be, but a 2018 study commission estimated it would cost the state between $9 and $13 million to legalize marijuana.

Who would be responsible for regulation?

The bill establishes a Cannabis Control Commission to oversee marijuana sales, similar to the Liquor Commission.  The commission would be appointed by the governor and Executive Council, and could hire staff to carry out licensing, investigations, and so on.

That commission would be responsible for developing the regulations and licensing process for marijuana cultivation and sales, from fees to testing and labeling requirements.  Rep. Cushing’s bill does include some guidelines for those regulations. For example, the commission must restrict marijuana advertising that could reach minors.

The bill also establishes a Cannabis Advisory Board, made up of members of law enforcement, business, social services, and many other fields.  That board would be responsible for holding public hearings at least every six months and recommending marijuana regulations, laws, and taxes.

Would towns have a say?

Under Rep. Cushing’s bill, towns and cities could prohibit or limit marijuana establishments.

The bill also prohibits marijuana establishments within 1,000 feet of a school, unless a municipality overrides that rule.

Right now, there is no reliable scientific test for marijuana intoxication, which makes it difficult to prosecute someone driving while high on marijuana.

This bill helps a little with that by prohibiting marijuana consumption by anyone in a moving vehicle.  A driver smoking marijuana could have his or her license suspended for up to six months on a first offense, not to mention a fine of $500.

Annulment of past marijuana offenses

The bill has a provision that would make it easier for New Hampshire residents to annul past convictions for marijuana possession.

Arguments for, against marijuana legalization

The debate over marijuana legalization has been going on for years.

Click here to learn more about the marijuana legalization issue

Supports of Rep. Cushing’s bill point to New Hampshire’s neighboring states that have already legalized marijuana.  New Hampshire residents interested in marijuana can just hop across the border.  The Granite State should at least capture tax revenue from these individuals.

Opponents of marijuana legalization – including Gov. Chris Sununu – argue New Hampshire should not legalize any drug in the middle of an addiction crisis.  They are particularly concerned about minors gaining more access to marijuana after legalization.

Since Gov. Sununu opposes marijuana legalization, the Legislature would likely need to override his veto.  It’s unclear if there is a super-majority of legislators who support legalization.

Do you support Rep. Renny Cushing’s bill to legalize and tax marijuana in New Hampshire? 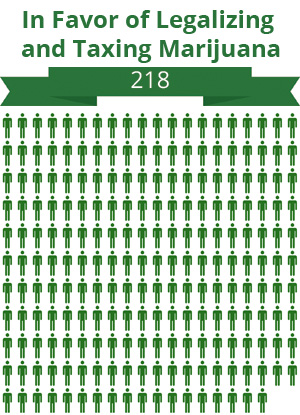 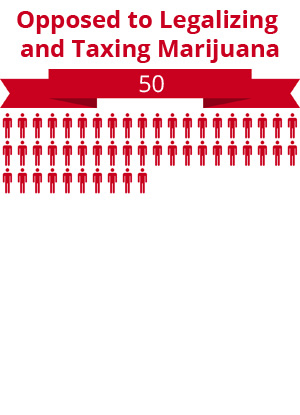 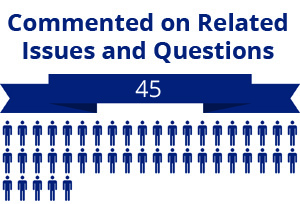 Yes: 218 people were in favor of legalizing and taxing marijuana in NH.

No: 50 people were opposed to legalizing and taxing marijuana in NH.

Other: 45 citizens addressed their comments to related questions and issues.
These included:

Yes...but not until a test

Yes...but not until a test can be designed to show impaired driving while DUI. Does anyone think the "possible" suspension of license or fine is a deterrent? Look at the drunk drivers, it doesn't stop them.

Yes . Comparing the opioid crisis with any part of marijuana shows a serious lack of education on our Govenor. As for the tax 30 on a ounce? Your defeating the whole reason to legalize. You cant squeeze your base like that ,you already control alcohol sales and reep those benefits your 30$ tax on a once is just being greedy. It will just have people search out a cheaper place. The way to do it is keep your tax fair like 15 and 5 and 2 the state is still going to make a boat load of cash plus you may attract taxachucettes money. You should encourge any farm not growing to farm hemp . start a state co-op and sell it on the open market for industrial use , better yet get industry to come here and communities could form there own co-ops and sell to the industry the state can get a tax of the industry everybody wins. Putting a ridiculous limet like you have on what a property owner can grow will cause more problems then its worth. How will you enforce it? Now if you say it like you can grow on a 60'×20' run of land , at least you could do fly overs like they do every year and see the patch and measure . Im not sure the person wrighting this knows how much you get off a plant. Most people would prefer to grow enough to get them through winter . I just think going in greedy will bite the state in the ass . There is nothing but growth potential here but if you go in hard you risk disrupting the whole thing . Slow and steady wins the race . Remmber people who smoke,eat, marijuana want nothing to do with the stupid stuff thats effecting this state . In my fifty some odd years no one has smoked pot and said i need to try these opioids im hearing so much about. We understand its not harmful to us but benificial . The states fight is with big Pharma not mother nature.

Yes, legalization is appropriate and needed! I mean shoot it's safer for you health wise than alcohol for goodness sake. It will be no more or less easy for kids to get (kids almost alsways get their hands on stuff they shouldn't if they try, legal or not). Be a responsible parent and go through their stuff and keep them accountable and teach/train them properly as a good parent should do!

Yes. Although unsure of the

Yes. Although unsure of the tax part. If we look back at the 18th Amendment to the US Constitution we see that the prohibition on alcohol was a failure. The made Marijuana illegal at the end of that prohibition to keep government agents on a payroll once prohibition ended. The point is prohibitions are a failure. If you want to fix this mess, then we need to address the failures and eliminate them, this is a step in the right direction.

From NH, for 33 years now. YES - legalize. It just make sense morally/legally, and with neighboring states doing it/taxing it, NH shouldn't miss out on the economic benefits.