HB 564, sponsored by Representative Mary Heath (D), would prohibit all firearms in school safe zones.  Anyone found to be in violation would be charged with a Class A misdemeanor.   The proposed bill allows for the following exceptions: persons dropping off or picking up a student provided the firearm is in a vehicle and properly secured, a person duly authorized in writing by the school board to possess a firearm, or a law enforcement officer, trained resource officer, or member of the armed services.

Supporters of prohibiting guns in school safe zones altogether express concern about armed parents in disputes with other parents and teachers, and note that armed citizens can cause confusion for law enforcement if there is ever an active shooter.  There are also those who believe that guns have no place on school grounds.

Opponents of the proposed law say an armed adult serves as a deterrent to those who would wish to do harm and worry that banning guns would leave schools vulnerable in the case of violent acts.  They feel that the bill imposes unnecessary restrictions on lawful gun owners.

Other opponents argue that the decision should be left to local school districts.

Should New Hampshire prohibit guns in all safe school zones? 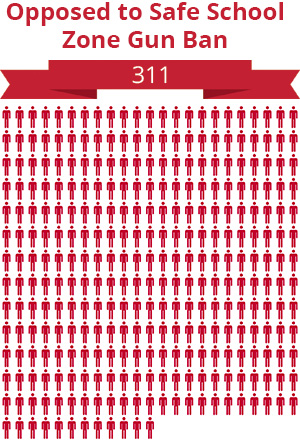 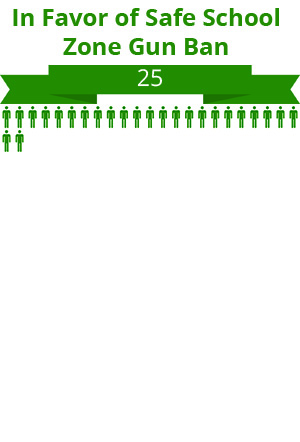 No: 311 people were opposed to banning guns in safe school zones.

Yes: 25 people were in favor of banning guns in safe school zones.

Other: 13 people commented on related questions and issues instead.
These included: