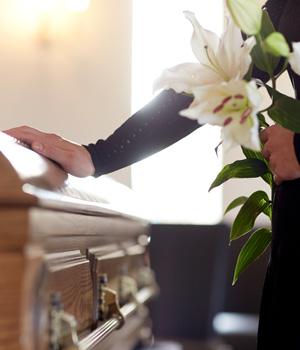 Green burials are aimed at returning bodies to the earth with minimal environmental impact. Generally, bodies in green burials aren’t embalmed. They’re put in biodegradable caskets or are buried without a casket. Green burials also usually don’t use a vault – like a steel or concrete liner around a person’s grave.

Learn more about green burials from the NH Funeral Resources, Education and Advocacy site, or through this delightful episode of NHPR’s Outside/In.

Can you get a green burial in NH?

Every city and town in NH is required to maintain at least one cemetery and make lots in it available for purchase to residents. But cities and towns also have a lot of leeway in setting rules for those cemeteries. Most towns in NH require that bodies be placed in a vault.

Who sets those rules about what burials in town cemeteries must look like? It can vary from town to town. Rules set by a vote of town residents take precedence over anything else, but if town residents haven’t weighed in, the town select board or city council can set rules. And if boards and councils are silent on the issue of town cemeteries, the local cemetery trustees can decide.

Currently, only a handful of towns in NH explicitly allow green burials. You can find one list here, or your funeral director may have more information. Most of those cemeteries set aside a special area for green burials.

How could the rules about green burials change?

If you’re interested in learning about the rules for green burials in your town, you should start with contacting your local cemetery trustees. They can also tell you what would be required to change those rules – a decision by the trustees, action by your board or council, or a vote of the people.

It’s also possible that action at the state level could require towns to allow green burials in their cemeteries. There was at least one attempt to do so back in 2008, but it didn’t get very far.

America’s most common funeral practices today have a heavy impact on the environment. Embalming uses toxic chemicals, while a single cremation releases 540 pounds of carbon dioxide into the air. Green funerals have a smaller environmental footprint. They also generally cost less, giving people a more affordable option for burial. There can also be religious reasons for wanting a green burial, so there’s an argument that allowing green burials in municipal cemeteries is an equal rights issue.

Advocates also note that burials without vaults or embalming were the norm before the Civil War. Since many local cemeteries in NH have graves that are hundreds of years old, they already contain a great many “green” burials.

There are practical reasons for requiring vaults

Opponents of allowing green burials in municipal cemeteries point out that vaults are sometimes required because they make cemetery maintenance easier by keeping the ground level. They also allow burials to take place closer together, since cemetery workers don’t have to worry about accidentally disinterring someone’s remains when digging a new grave. Others argue that it doesn’t make sense for towns to set aside space for green burials since right now, they represent only a very small percentage of funerals. They argue that those seeking a green burial can look for a private green cemetery.