Right now, those wishing to purchase a gun in New Hampshire must undergo a background check in accordance with federal law.  This regulation does not apply to private sales made at gun shows, however.

This year, lawmakers will consider HB 109 which requires all commercial firearms sales take place through licensed dealers. Such dealers are required by federal law to perform background checks on gun purchasers.  This would effectively close what some call the “gun show loophole” that allows gun buyers to avoid background check requirements by purchasing from private individuals at gun shows.

What happens if a person wants to buy a gun from someone but neither party is a licensed gun dealer? According to the bill, the two parties would have to find a licensed dealer to facilitate the transaction. HB 109 explains that the person wishing to sell the gun would bring it to a licensed dealer, who would then process the sale as if it were their gun. This includes conducting a background check on the purchaser with the National Instant Criminal Background Check System (NICS). The bill grants such a facilitating dealer the right to charge for administrative costs related to this service.

Some worry this legislation could impact individuals wishing to sell or transfer guns privately, such as transactions between family members. This bill makes an exception for such sales, provided neither party is prohibited by law from owning a firearm.

A first-time violation of the proposed law would constitute a class B misdemeanor. The penalty rises to a class A misdemeanor for second or subsequent violations.

The bill states it is intended to “protect public safety by helping to keep firearms out of the hands of felons, domestic abusers, and the dangerously mentally ill.” Those in favor of requiring background checks at gun shows feel that doing so would close a dangerous loophole in current regulations.

Opponents argue that this bill would place an unfair burden on private gun sellers who do not earn their primary income from selling guns. Some are concerned the wording of the bill could lead to criminal charges for a person who transfers a gun to a friend or family member without a background check.  The New Hampshire Department of Safety also warns that this change would increase general fund expenditures by requiring they help facilitate more background checks than they do currently.

Learn more about NH gun laws on our issue page

Do you support legislation requiring all firearms sales be made through licensed dealers who must perform background checks? 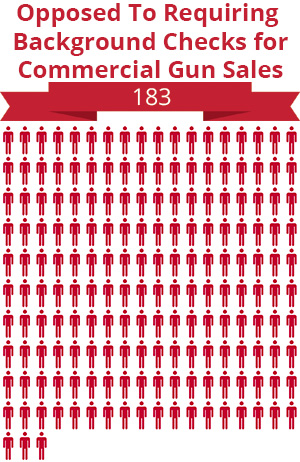 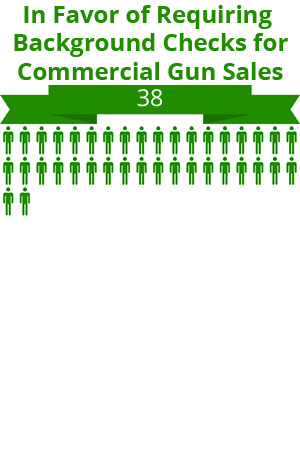 No: 183 people were opposed to requiring background checks for commercial gun sales.

Yes: 38 people were in favor of background checks for commercial gun sales.

Other: 18 citizens addressed their comments to related questions and issues.
These included: