Rep. Ellen Read has proposed a bill that would allocate New Hampshire’s electoral votes to whichever candidate won the national popular vote. So far 12 states and the District of Colombia have passed similar bills.

Article II Section 1 of the United States Constitution requires each state legislature to decide how it will choose the electors it sends to the electoral college. Currently, all but two states (Nebraska and Maine) use a “winner-takes-all" system where the single candidate with the most statewide votes wins all of the state’s electoral college votes.

Learn more about proposals to repeal the electoral college

Supporters argue that deciding presidential winners by national popular vote would make every American’s vote count equally and would force candidates to focus their campaigns on more than just key battleground states. They point out that in every instance in recent history where the electoral college chose a candidate that lost the popular vote, the Republican candidate has won. They say this is unfair to Democrats, who often carry states with large urban populations.

Opponents argue that such legislation violates the spirit of the Constitution, which values states as unique jurisdictions. They also worry that a switch to the national popular vote could hurt the interests of smaller, less populated states like New Hampshire. Such people feel that the electoral college system helps balance the concerns of all the states and doesn’t leave the choice of president up to densely populated states like New York and California. As the adage goes, “direct democracy asks two wolves and a sheep to vote on what’s for dinner.”

Should New Hampshire give its electoral college votes to the presidential candidate who wins the national popular vote, even if that candidate lost in New Hampshire? 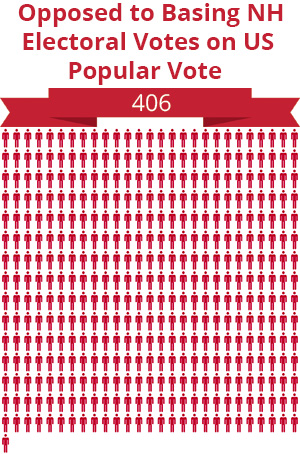 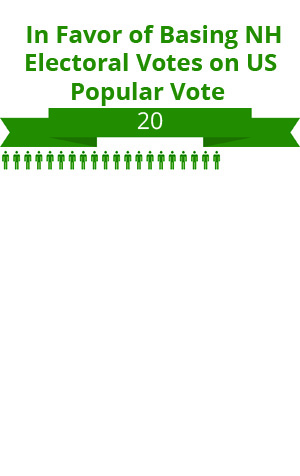 No: 406 people were opposed to allocating New Hampshire’s electoral college electors based on the national popular vote.

​Yes: 20 people were in favor of allocating New Hampshire’s electoral college electors based on the national popular vote.

Other: 23 people commented on related questions and issues instead.
These included comments critical of the electoral college but which advocated for different policies in response:

Seriously NH Pols? You lose the election and this is your answer? Why are Democrats so bad at gracefully losing these days? If you can't beat'em, change the election laws of this country.... that is your answer? I am registered as an "I" but will never vote for another Democrat ever again.... EVER.

Oh, and you claim to be

Oh, and you claim to be "fighting" for NH citizens? How does this "help" anybody living here in this State? Get back to legislating FOR our State and not FOR your party.

Absolutely not. To do so

Absolutely not. To do so would negate the votes of NH citizens. Such a law would convert the USA to a democracy, mob rule and spell the death of our republic.

Absolutely not. To do so

Absolutely not. To do so would negate the votes of NH citizens.

Absolutely not!! You should

Absolutely not!! You should all learn a little about the American revolution before considering such reckless legislation.

NO! Absolutely Not! Yes,

NO! Absolutely Not! Yes, please give my vote to NYC, LA, Chicago, Houston or the remainder of the major metro areas! So those of us who live in rural America have no say in the election!

NO. That decimates states'

NO. That decimates states' rights under the Tenth Amendment.

NO! It was put in place to

NO! It was put in place to protect smaller populated states like NH!