State Rep. Betty Irene Gay (R-Salem) has advanced HB 471 that requires all drivers’ licenses and nondrivers’ identification cards indicate whether the holder is a “US Citizen” or “Non-US Citizen.”

The legislation states: “Before the department issues any license to any person under this chapter, the department shall have examined evidence of the person's citizenship.” The bill provides no examples of suitable “evidence.”

Non-citizens can get a license

Non-citizens who are living in New Hampshire legally —such as refugees, individuals on student visas, and individuals with an employment authorization card —may apply for a driver’s license if they can provide proper documentation of their legal status to the DMV. However, their citizenship status is not currently displayed on the license itself.

Immigrants who are here in New Hampshire illegally cannot get a driver’s license.

Currently, state licenses contain information such as gender, height, weight, age and a photo, and also indicate veteran status and whether the individual is an organ donor.

Supporters of the legislation say an indication of “US Citizen” or “Non-US Citizen” will give law enforcement more information regarding a person’s status that could be helpful in determining whether the individual is in the country legally or illegally.

Opponents of the legislation say there is no reason for state officials and law enforcement to consider the citizenship status of drivers.  The federal government is responsible for immigration enforcement.  They argue that this legislation would unfairly stigmatize legal immigrants. Since proof of citizenship — such as a birth certificate or naturalization papers —  must be shown in order to register to vote, they also argue the move is not an effective strategy for preventing voter fraud.

Should New Hampshire drivers’ licenses show if the person is a U.S. citizen? 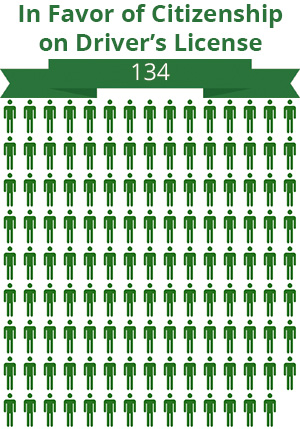 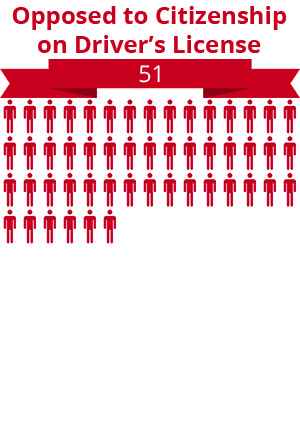 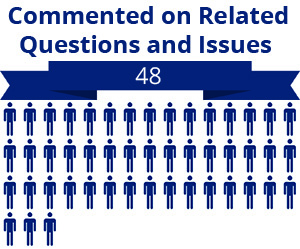 Other: 48 people commented on related questions and issues instead.
These included: