THANK YOU TO OUR SPONSORS!
LEARN ABOUT OUR SPONSORS
JOIN TODAY AND SEE OUR COMMUNITY GROW 210191 MEMBERS

In New Hampshire, the power to regulate firearms lies with the state Legislature. No city, town, or other body can pass laws more strictly regulating guns.

A proposed law in the 2019 legislative session would change that power as it relates to schools. HB 101 allows local school districts to decide whether guns should be allowed on the premises.

Federal law designates schools as “gun-free zones,” which means that only licensed adults (who are not students) can bring guns onto school grounds.

New Hampshire state law regarding “safe school zones” (any school property or school bus) likewise prohibits students from bringing guns to school, and requires that any pupil who does so – concealed or otherwise – without written authorization from the superintendent be expelled from school by the local school board for at least 12 months.

However, New Hampshire law doesn’t place any additional restrictions on whether licensed adults can carry firearms on school property.

Should schools have more power?

Supporters of HB 101 say it should be up to local districts to decide whether they want to allow guns in schools, as this puts more power back in the hands of local communities. Some districts might want to prohibit firearms altogether as an added layer of protection against school shootings, others may feel guns have no place on school grounds.

Opponents say that current laws restricting carrying in schools to only permitted individuals are sufficient. Others worry that allowing school districts to potentially ban guns in schools altogether would make them more vulnerable to acts of violence, since staff and other law-abiding citizens would lack the means to defend themselves.

Should local schools and school districts have control over who can bring guns onto their grounds? 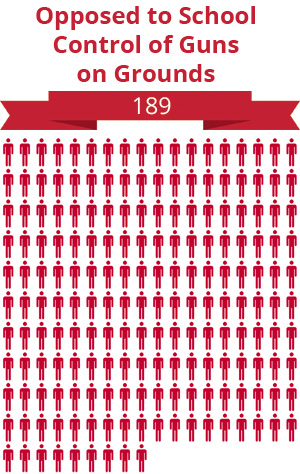 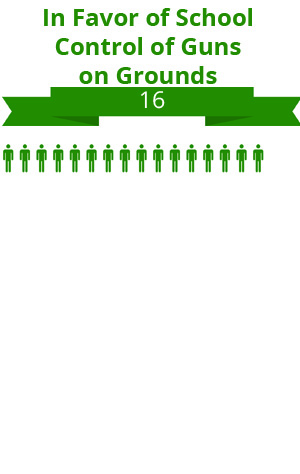 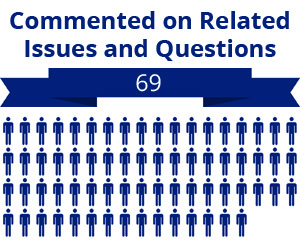 No: 189 people were opposed to giving schools and school districts control over who can bring guns onto their grounds.

Yes: 16 people were in favor of giving schools and school districts control over who can bring guns onto their grounds.

Other: 69 citizens addressed their comments to related questions and issues.
These included:

But would you feel the same

But would you feel the same if the state law *prohibited* licensed individuals from carrying guns on school property? I don't want guns anywhere near my school unless the weapon belongs to a trained police officer. These deranged school shooters carry out their actions fully prepared to die - whether at the hands of an officer or someone else. The notion that someone in the school might be armed does little to deter.

Going back to the original question - I think these laws should be established at the state level. If it means that much to a district, elect a rep or senator who will push that agenda.

First, NH has had no instance

First, NH has had no instance of an active Shooter. None. Second, your ideas about mass shooters are ill-conceived. I had the privilege of attending a 3-hour presentation given by retired Col. Dan Barden of the CT State Police, who was the OIC during the Newtown/Sandyhook Shooting. Mass shootings are generally over in 2-3 minutes or less. If a mass shooter comes through the door and has to face an armed person, Be it a police officer or citizen, that is part of the equation the mass shooter had likely not contemplated. Nevertheless, that shooter now has to deal with that armed citizen. Note, that when you see a SWAT team enter a building, they have body armor, they are in a stack, have shields and helmets.. All against one guy with a pistol. Don't continue to be misguided into thinking that one private citizen, properly trained and armed with a gun cannot stop a mass shooting. It has happened, but you won't read about it in the media. First, it doesn't fit their narrative and second, not enough people die to make it a national story.

I'm as a New Hampshire

I'm as a New Hampshire resident, do not support giving that authority to the towns, municipalities, schools, or any other governing body. The statewide law on firearms in schools is sufficient. It allows licensed individuals to carry which creatrs a deterrent for those who seek to cause harm. If that protection is removed then it will only serve to make the students and staff an easier target for the bad guys.

Allowing individual municipalities or districts within a state to originate and enforce their own firearms legislation leads to unavoidable conflicts - what is allowed in one area will get you locked up when crossing a border into another. It becomes very difficult for those who wish to obey the law to keep track of the law. Also, criminals seeking to do harm are not going to obey any legislation simply because it exists. I am in favor of schools remaining 'gun-free' zones as mandated by federal and state law, and could support any changes in laws only at the state level.