The NH Legislature is currently debating a bill that would create a 5% tax on capital gains, lower the state education property tax, and increase funding to public schools.

The problem of property-poor towns

The move is driven by concerns over public school funding. While there are other sources of revenue that go to fund schools, like proceeds from the NH Lottery, the bulk of school funding comes from property taxes.

A statewide education property tax contributes roughly $363 million per year to education funding. Overall, state money pays around $3,700 per public school pupil, plus a bit more for each kid who receives free or reduced lunch, is an English-language learner, or requires special education services.

However, the average cost of educating a student in New Hampshire comes to around $15,000.

It’s up to local communities to make up the difference, which they do through local property taxes. That poses a particular challenge for towns where property values tend to be low.

Reductions in enrollment have also hit property-poor towns hard. For several years, the state guaranteed level funding for schools with declining enrollment, but that funding (“stabilization grants”) is scheduled to decrease over the next few years.

A capital gains tax is a tax on profits from the sale of certain types of assets, such as stocks or real estate (other than your primary residence).

New Hampshire doesn’t currently tax capital gains, but the state does impose a 5% tax on earnings from interest or dividends.

HB 686, sponsored by Rep. Richard Ames, would add capital gains to the state’s interest and dividends tax. It would also increase tax exemptions, leading to a total estimated increase in general fund revenue of about $95 million.

The bill then increases the state’s per-pupil funding to public schools, raising the base level grant to $4,500 in fiscal year 2020, with smaller increases for those special categories of students. The bill calls for continued increases in future years, tied to the rise in the Consumer Price Index. Schools would no longer see funding cuts through the system of stabilization grants.

The bill also cuts the amount of money the state is required to collect through its statewide education property tax by 25%.

Supporters of HB 686 argue that the current education funding system isn’t working. They say too much of the burden of funding education is being left to cities and towns, placing a particular strain on communities with lower property values. The result? The quality of a child’s education in New Hampshire becomes a matter of zip code – a situation they argue opens the state up to another lawsuit.

For Rep. Richard Ames, a capital gains tax would be a fairer way to provide property tax relief and increase education funding. According to Ames, “Capital gains income, which is investment income just as is interest and dividend income, is received mostly by people with high incomes... most of the proposed tax on capital gains will be paid by people with incomes in the top 20 percent of the income spectrum.” Ames also notes that all of New Hampshire’s neighbors have capital gains taxes.

Opponents counter that a capital gains tax is bad economic policy, penalizing both investment and savings. “This is an attack on business creation, a tax on risk-taking,” says Rep. Patrick Abrami. “Those who invest can win big and lose big. New Hampshire will not share in the losses but take 5 percent of the gain. This is not fair at all. It sounds like a redistribution of wealth.”

Others express concern that the tax could drive investors to leave New Hampshire for other states, or note that the tax can be particularly unfair to those making long-term investments, since it does not take inflation into account when calculating how much someone has ‘gained’. They argue that there are better sources of revenue for increasing funding to schools, such as sports betting, leveling or raising business tax rates, or finding savings by decreasing government spending in other areas.

Should NH create a tax on capital gains in order to lower state property taxes and increase public school funding? 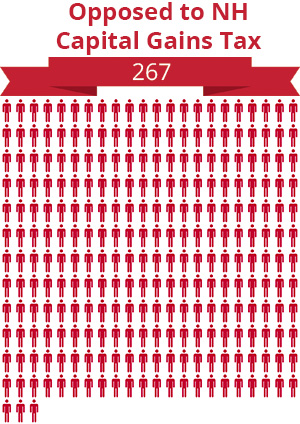 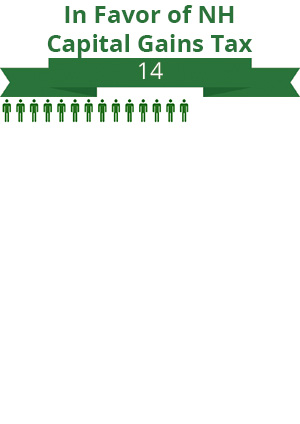 No: 267 people were opposed to creating a tax on capital gains in order to lower state property taxes and increase public school funding.

Yes: 14 people were in favor of creating a tax on capital gains in order to lower state property taxes and increase public school funding.

Other: 16 people commented on related questions and issues instead.
These included: