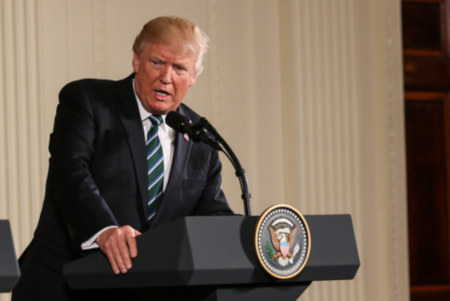 How does impeachment work?

The U.S. Constitution allows for the impeachment and removal of a president for “treason, bribery, or other high crimes and misdemeanors.” There is no strict definition of what crimes fall under that clause.

To impeach a president, first a majority of the U.S. House of Representatives must vote for impeachment. This is like charging the president with a crime.

The U.S. Senate then holds a trial overseen by the chief justice of the U.S. Supreme Court. A team of representatives plays the role of prosecutor, the president has his own defense team, and the senators act as jury.

To remove the president from office, two-thirds of the Senate must vote in favor.

The House of Representatives has voted to bring impeachment charges just three times: in 1868 with Andrew Johnson, in 1974 with Richard Nixon, and in 1998 with Bill Clinton. Both Johnson and Clinton were acquitted in the Senate; Nixon resigned.

Where do NH candidates stand on impeachment?

In order to impeach the president, Democrats would most likely need to regain control of the U.S. House of Representatives.

This year there are over two dozen candidates for just two congressional seats in New Hampshire.

In favor of impeachment

Naomi Andrews, William Martin, Deaglan McEachern, and Lincoln Soldati, all Democrats running in the 1st District, say they would vote in favor of impeachment.

Ann McLane Kuster, the Democratic incumbent in the 2nd District, has not committed to voting for or against impeachment.

Republicans Eddie Edwards and Andy Martin in the 1st District both oppose impeaching the president at this time.

Several candidates, including Democrats Mark Mackenzie, Terence O’Rourke, Chris Pappas, and Levi Sanders, would like to wait until the conclusion of the Mueller investigation before deciding on impeachment. For example, 1st District Democrat Paul Cardinal said on our 2018 Federal Issue Survey:

"I would wait until the conclusion of the Mueller investigation to assess all the data we have. If the investigation is ended by the Executive Branch I would support impeachment."

Click here to see profiles of all the candidates for U.S. House, including their issue positions

Do you have an opinion on impeachment? Share your thoughts in the comments below.

Impeachment, despite having a judicial structure, is an inherently political act/procedure. In this light, "high crimes and misdemeanors" must refer to non-criminal actions. Thus, virtually anything becomes an impeachable offense, if Congress wants it to. However, since no president has been convicted after impeachment, even after being convicted of a felony, the act serves primarily, and perhaps solely, as an embarrassment to the president. I can't see any value is spending the time/effort/money to embarrass the leader of our country. To even consider such a travail without good reason to expect a conviction serves only to undermine our political unity and, therefore, should be avoided.